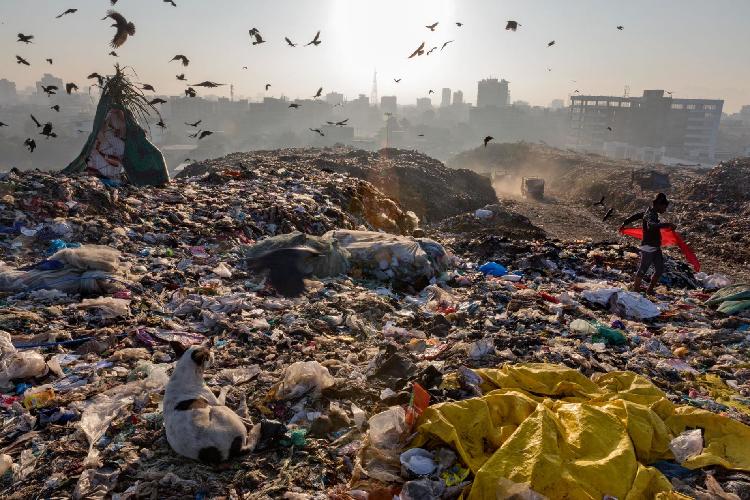 Are We About to Be Hit With a Plastic Waste Disaster?

“A cardboard box wrapped in our No. 1 contaminate, film plastic," Joe Dunlap, a waste expert at the Athens-Clarke County materials recovery facility says, "That's just bad. What is so awful about a cardboard box that they had to go and do this to it?"

Joe is just one of the many local and nationwide recycling plant workers infuriated when materials that could have been recycled, like cardboard, are made useless by wrapping them in plastic.

But there must be a way to recycle these items right? Someone must have the equipment to make this stuff usable again.

Until recently, China was the go-to dumping site for the world’s hard to recycle materials. Everything from food-soiled paper to thrown out credit cards, you name it, China recycled it.

Or at least tried to…

Not All It Was Cracked up to Be

As the demand for recycled raw materials in China rose recycling companies sprang up all across the country.

In just a few decades, Zhang Yen became China’s 1st female billionaire off the back of the world’s recycling needs.

But for every successful recycler like Ms. Yen, there are dozens of small disreputable recycling companies.

They illegally import materials to be recycled, bypassing both taxes and any kind of accountability for what happens with all that waste.

When they’ve poached what they can they destroy the surrounding nature by throwing anything they aren’t able to recycle out into the open canyons and wildlife areas surrounding their factories.

And China’s had enough. Last year they stopped almost all imports recyable waste. They took in just 1% of the 7 million tons of garbage they accepted in 2016.

That’s bad news for local recycling plant workers like Joe Dunlap. American recycling plants aren’t designed to accept the kind of waste China was taking on for so many decades.

Thin plastic films like the one covering the cardboard Joe pulled up gum up the separating machinery. Even with the proper equipment most of the waste we were sending to China is so expensive to reuse it is unprofitable to do so.

Just Dump It Somewhere Else

Exports of recycling waste to countries like Thailand and Indonesia continue to balloon. Thailand accepted 7,000% more recycle waste in 2018 than it did the previous year.

This might seem like a reasonable solution. But these countries aren’t equipped to handle this massive amount of recycling waste. They’re seeing the same problems China had.

So they agree to become the world’s recycling bin, only to pollute the surrounding ocean and land with the very garbage they are supposed to be recycling.

What Are Ways You Can Help?

Make thick plastics make their way to your local recycling plant. Shampoo bottles, yogurt cups, and other thick plastics are much easier to clean and reuse than more flimsy containers.

Limit your use of unrecyclable plastics like saran wrap that even China can’t recycle. Reuse plastic bags by rinsing them out and avoid single-use containers like coffee cups and water bottles.

Don’t Litter When You Don’t Have To.

When you need to get rid of a lot of waste all at once, you’re going to need a dumpster right away, not weeks from now.

Setting up a bulk trash pickup appointment with the City is a hassle and can take days or weeks.

Not to mention they’ll expect you to move the thing once it weighs a few hundred or thousand pounds.

With Bin There Dump That you can have a dumpster waiting at your doorsteps before you pour your morning coffee.

We’ll take care of transportation and protecting your driveway, something other dumpster rental companies expect you to do.

So start on that remodel of your dreams or just get rid of all the clutter you’ve built up over the years. Call now!